It's hard to beleive it's been over 4 months since I've posted.  And I'm still not sure I'm ready to return to regular or semi-regular blogging.  But I thought I'd take a few minutes to check in and assure some who have missed me (thank you) that I am alive and still quilting, albeit at a slower pace.

I ended 2012 by finishing one more of my long standing UFO's....my version of Dear Jane.  Since I was doing the machine quilting during the last few days of the presidential campaign, I decided to call my quilt "America's Choice 2012".  My quilt is set together far differently than the original.  I based it on a version I saw on the internet several years ago and it was a challenge to figure out the spacing. Thanks to my friend Geta  for her help doing this. 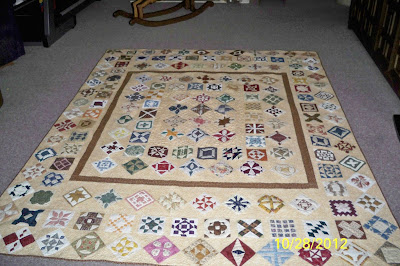 And a close up 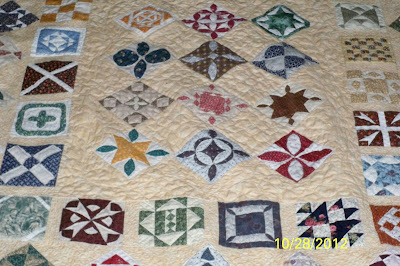 We traveled to Des Moines in October to attend the AQS International Show.  It was indeed an honor to have one of my quilts hanging in the show for the second year in a row.  Here is my Dutch Trade. 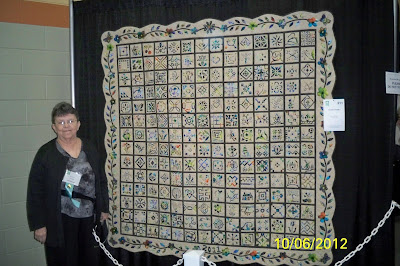 I've continued to work on my hexagon quilt, not  daily, but frequently.  It's grown a bit since I showed it last. 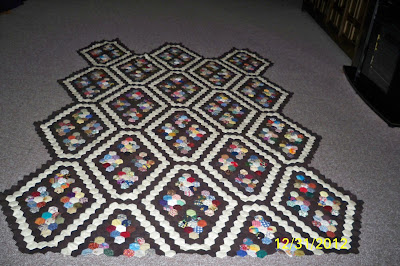 So the goal this year is at least 12 quilts.  January is ending with two tops completed.

First this strippy quilt based on a photo I found online. 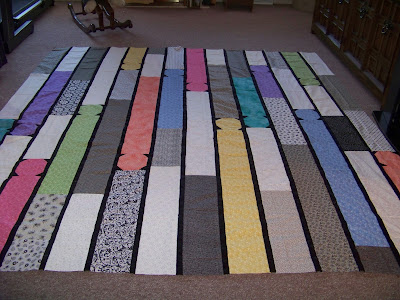 I added a 1" black border on all four sides after this picture was taken.


And the pieced back 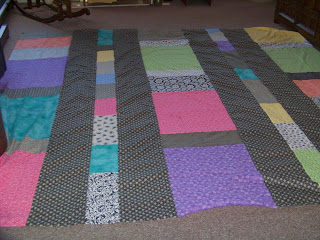 You all know this is not my normal color palette. Far too bright for me!
So while I was working outside my normal box I decided to finish a BOM kit I started two or three years ago called My Secret Garden. It's from a book called "Secrets From the Garden, Quilts With Floral Charm" by Cincy Lammon.  I had previously made four or five of the blocks and then sat it aside because it was just too PINK for me.  Time to get it out and finish, except it turned out that  some of the fabrics were either missing entirely or cut wrong in the kit.  So I had to do some pulling from my stash and also decided to substitue a Sunbonnet Sue applique block for one of the pieced blocks in the original. 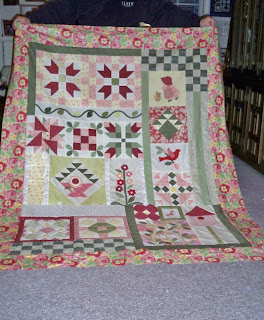 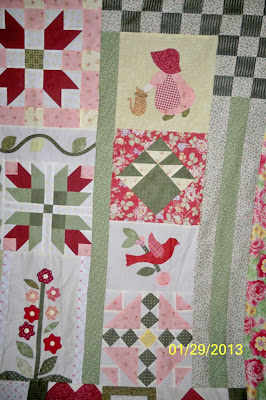 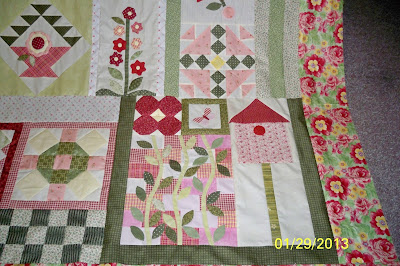 That catches us up.
We've experiencing very strange weather here in SE Kansas.  Yesterday morning it was 70º when I got up with a tornado watch in effect, 56º at noon,  and snow was predicted as possible last night (but didn't happen). Today it is in the 30's.
Happy quilting.  I'll try to do better.

Trade with Tom as well

Dutch Gold--Click for a slideshow

Dutch Trade..click on photo for a slideshow of blocks

My Larger Quilts To Date

My Quilt Projects To Date

I Am A Superior Quilter 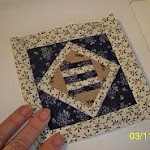 Blogs That Inspire and Delight Me

Some of My Favorite Places